Right Side Windows from the back of the Nave

Windows are from the New Testament and depict the words and works of Jesus. 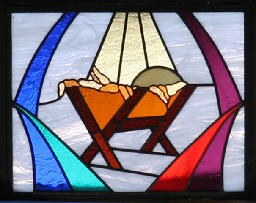 The Nativity Window – The star of Bethlehem and its beautiful rays is represented clearly in this window. The incarnation of the Son of God is represented by a manger and begins the series of windows depicting aspects of Jesus’ life and teachings.  The three-fold light above the manger captures in art, what we sing in the hymn, “Silent Night”: 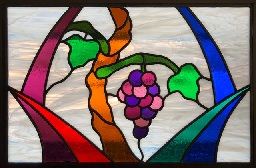 The Branch, Vine and Fruit Window – Jesus said, “I am the vine; you are the branches.  Whoever abides in me and I in him, he it is that bears much fruit, for apart from me you can do nothing.” (John 15:5).  This window is a reminder that, as we gather around the Word of God and the Sacrament of the Altar in this place, Jesus abides with us and we with him.  From within the walls of our church, we go out bearing “much fruit”, namely the good news of forgiveness and life in Jesus. 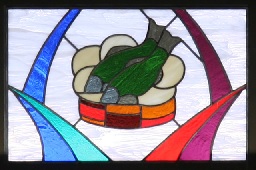 The Loaves of Bread and Fish Window - This window represents a miracle of Jesus that is recorded in all four Gospel records.  Jesus multiplied five loaves of bread and two fish to feed more than five thousand people, reminding us that He is true God and the One through whom all things were created and are sustained. The image in this window also moves us to give thanks to our Triune God for providing us all we need to support this body and life. 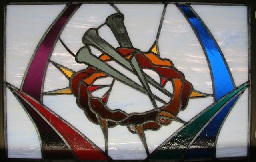 The Crown of Thorns and Nails Window - The suffering and death of Jesus is represented in this window with a crown of woven thorn branches and three nails.  Jesus was horribly beaten and then mocked by Roman soldiers on the day of His crucifixion.  The abuse included a crown of thorns, pushed down upon His head in a sarcastic insult of His title “King of the Jews”. The nails remind us of Isaiah’s prophecy that the savior would be “pierced through for our transgressions” (Isaiah 53:3).  Jesus’ hands and feet were pierced through with nails. There, suspended on the cross, He bore the sins of the world. 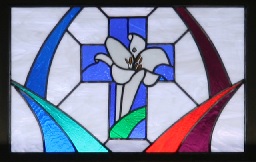 The Cross and Lily Window – From the cross death of Jesus, flows life. This wonderful reality is represented in the window by a white blooming lily flower. The lily has been a symbol of the resurrection in the church for many centuries. The shape of the Easter lily flower acts as a trumpet, sounding the message that Jesus has risen. Others have noted that, since lilies start as ugly bulbs, living underground for three years and then blooming into fragrant flowers. Thus, the Lily is a picture of the resurrection. 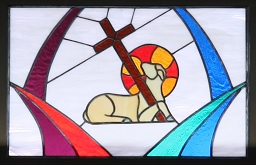 The Lamb of God Window - Following the baptism of Jesus, John the Baptist proclaimed Jesus to be “the Lamb of God, who takes away the sin of the world!” (John 1:29).  Three years later Jesus would fulfill those words by His death on the cross. His death was the perfect sacrifice that paid the price for the sin of the whole world.  Jesus is also the living lamb spoken of in chapter 5 of the Revelation to St. John. “Worthy is the Lamb who was slain, to receive power and wealth and wisdom and might and honor and glory and blessing!” (Revelation 5:12).  Here, His victory over death is represented by the lamb, Jesus, holding the banner. Like a flag on an ancient battlefield, our eyes are drawn to His victory over death and the grave for us!